BE UNIQUELY YOU WITH A CUSTOM HOME

Designing and building a new home is the ultimate form of self-expression. And because we’re all different, your home can be designed to reflect your own individuality.

At Evolution Building Group, we take the time to really listen and understand the type of home that you’d like to live in and then work with our talented team to bring your vision to life. Working closely with you at each stage of the building process we’ll take you on a journey to custom build a home that’s completely unique to you. Every aspect of your home will be meticulously planned using the latest materials, fittings and finishes and will be built to the highest standard to ensure your home stands the test of time.

As an award-winning builder we’ve been recognised for excellence in design, quality and value and believe that this paired with our passion for putting our clients at the heart of everything that we do is the reason why we continue to design and build award-winning homes that people simply love.

ENQUIRE ABOUT YOUR CUSTOM HOME PROJECT

We love what we do and it shows…. we hope you agree with the many happy families we have been fortunate enough to design and build for, that we have achieved a level of excellence in design, quality and value ….. standards that have been recognised with awards from the HIA (Housing Industry Association) and the MBA (Master Builders Association).

Building a first home is often daunting – particularly when you’re attempting a custom build. The owners wanted to ensure that the process was enjoyable and the result was everything they’d been dreaming of which resulted in a striking home.

The sharp-edged, modernist exterior has been softened with the beautiful, natural texture of finely crafted timber and a lovely interplay of angles and materials. Precision construction was required to allow the simple elegance of the design to be realised.

The ground level of the exterior is anchored by PGH Sandstock Greenway bricks combined with dry pressed architectural splits. The choice of bricks provided the unique look the client wanted and allowed the brick to extend right up to window and door frames.

Clear coated Blackbutt timber screens feature on both the upper and lower levels facing the street. These screens give the home an elegance and presence – creating vertical interest to counterbalance the horizontal lines in the brickwork and Matrix cladding. Both screens ‘float’ above their positions – not quite touching the tiled areas below, adding a lightness to the modernist lines.

A stand-out feature of this home is the feeling of space and light provided by elements such as square set cornices in the living, bathroom and kitchen areas. Access to the light-filled entry hall is via a custom-made, pivoting, aluminium-framed glass door.

an architectural piece of art

When faced with a relatively steep, downward sloping site, the clients on this project initially tried to adapt existing project home plans to suit the site. This resulted in an unsatisfying appearance, poor floorplans and budget estimate blow outs.

Once a design was developed which worked with, rather than against, the slope, a functional floorplan was suddenly possible and Evolution was then able to bring this impressive, contemporary, split-level home into being – within budget.

A combination of un-rendered and rendered brickwork, Scyon Matrix cladding, Scyon Stria cladding and feature window hoods give this home a solidity and presence. A modern take on the Juliet balcony with glass balustrade opens the home to the street (and the views).

The removal of an old fibro cottage allowed this clever design to be specifically created to suit the elongated narrow sloping lot.  The garage offers additional depth for storage and allows the owners to step up into the entry foyer by stairs at the rear which also provide a clever use of under stair storage.
From the entry foyer, the first floor is accessed and the open plan living, dining and galley kitchen open to a fabulous deck featuring highlight windows above the bifold doors.
A standout feature of the living area is the feature fireplace and an open void overviewing the entry foyer.

"Evolution Building Group completed our ‘dream home’. It’s been one of the most exciting, enjoyable experiences of our lives. Darrin and his team have been an integral part of that.

We custom designed our home with South Coast Drafting so we only ever saw a 3D or floor plan of the house. It was a bit nerve wracking watching it ‘come to life’, but Darrin allowed us to be very involved and always informed of every facet of the build. We consider that to be really important, as it decreases dissatisfaction at the end. The Quality and workmanship of his trades is impressive. All of the suppliers Evolution Building Group use make the selection process of products easy and enjoyable.

We would highly recommend Evolution Building Group as a builder who will fulfil and go above what is expected of them. Our home is testament to that." Liane & John

This ultra-spacious, contemporary duplex was meticulously built to provide low-maintenance, luxurious living. The duplex features strong, clean lines inside and out. Sleek, cubist shapes and gleaming glass are harmonised with natural materials to create two welcoming yet sophisticated homes. The high quality of this build begins at the nature strip with low, white-rendered retaining walls echoing the upper level of the duplex and providing continuity of the modernist style.

A variety of exterior materials -  Rmax insulated cladding and sharp-edged rendered brickwork are unified by their crisp white colour and complemented by the warm tones of rock, river pebbles and timber. Maximum privacy is obtained in both homes via the offset design, positioning of driveways, gardens, fences and pools and separation of the entry porticos with a hand-laid, rock blade feature wall. Careful placement of windows further enhances this sense of privacy while flooding the interiors with light. A limited palette of complementary materials and neutral colours creates a sense of calm that pervades the exterior and interior of this duplex. 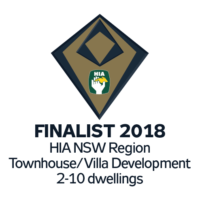 When young children become teenagers, suddenly your family seems bigger and your home smaller. That was the dilemma facing the owners of this new Evolution Building Group home. Their solution was to find a house design that better suited their needs and then modify it, making it the perfect fit.

The owners now have room for luxurious and harmonious family living, all wonderfully contained on a low maintenance 556m2 block. From the curb, this home presents as an executive residence. Light-toned, rendered masonry at ground level provides an elegant base for the horizontal, James Hardie Stria cladding in Dulux Caps on the upper level.

The magnificent two storey column to one side of the façade combines Howqua & Alpine stone supplied by Eco Outdoors. The warmth of the stone matches the tones in the timber garage door, creating an impressive yet balanced façade.

WANT TO KNOW MORE ABOUT OUR CUSTOM HOME DESIGN AND CONSTRUCTION?

want to explore what's possible for your new custom home?

Find out about our free site inspection and build estimate offer!

Wanting a new home and a investment property? Building a dual occupancy property can be a good option if you’re looking to unlock equity or maximise your property’s maximum potential. 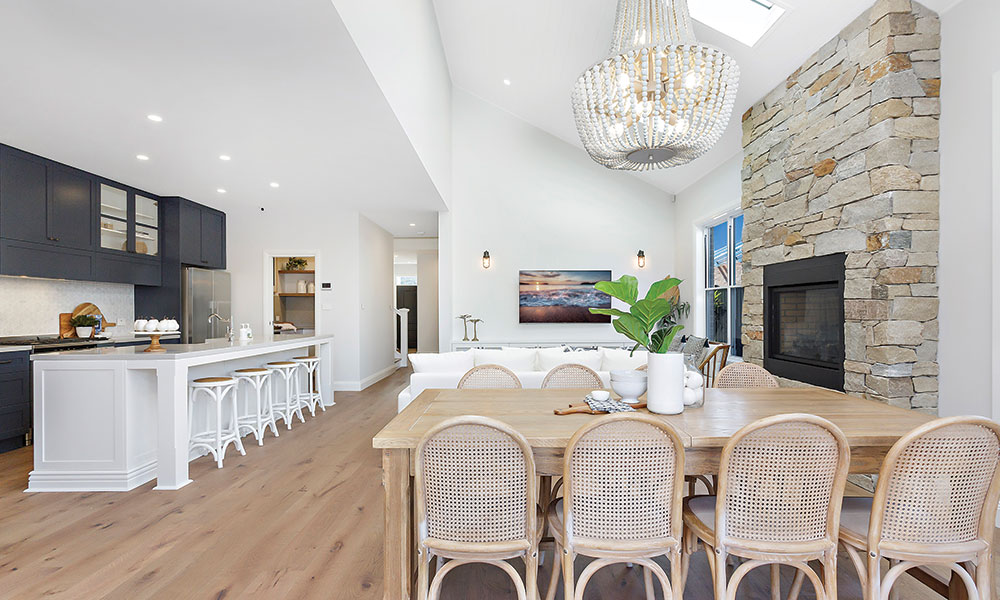 Words can't really describe how stunning this home is, this is why you have to see it for yourself and fall in love with the incredible Suffolk Display Home located in Wongawilli.